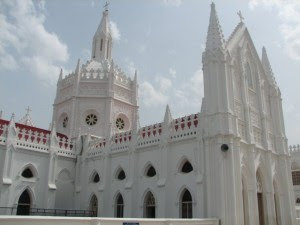 Vailankanni is fondly known as the 'Lourdes of the East' because like Lourdes in France, millions of pilgrims Shrinevisit the Shrine throughout the year, praying to Our Lady for various needs and thanking her for the favors received through her intercession.

Tradition recounts that Mother Mary appeared with the Infant Jesus in this small hamlet at the end of the 16th or in the early 17th century. Ever since, Vailankanni is the most important destination and almost the synthesis of all Marian Sanctuaries for the pilgrims of the world. The crowds of pilgrims come here regardless of creeds and languages.

Our Lady of Vailankanni devotions down through the centuries have proved the Shrine to be of divine origin and has assumed international character. Mary, the focus of unity at Vailankanni, is a clear proof of international, multicultural, and religious harmony.
Website

Vailankanni, a hamlet on the sandy shores of the Bay of Bengal, is located 350 kilometers south of Chennai (Madras) and 12Shrinekilometers south of Nagappatinam. Nagapattinam, a town on the coast of Bay of Bengal, was referred by early writers and the Portuguese as "the city of Coramandel' (Imperial Gazetteer of India, XIX, 3). Vellayar river, a minor branch of the river Cauvery, runs on the south of the village and flows into the sea.

Readers may be startled to learn that Vailankanni was once a port and there is evidence to prove this. Historical notes reveal that people in this area traded with Rome and Greece, the ancient commercial centers of the western world. In the course of time, Nagapattinam expanded and this tiny commercial center (Vailankanni) gradually lost its importance. The canal that had been dug once for navigation between Nagapattinam and Vedaranyam still lies to the west of Vailankanni.
Website: www.kallikulam.com