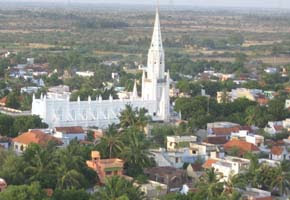 When this land was covered with thorn bushes and milk weeds (Kalli, whose name is attributed to this place), the first settlers were the Hindu Nadars from Kayamozhi. Later, certain Savarimuthu Nadar from Kavalkinaru, who had been baptized in Vadakangulam dwelt in here with his son Soosai Nadar. A small thatched church was built. This church was enlarged as catholic population increased, by Frs. Martin and Mossette. This had been a substation of Anaikarai in those days. Due to the special attention given by Fr. Victor Delbike of Anaikarai, the Hindus of Kallikulam became catholics eventually. It was Fr. Victor who on the 25 th of December 1865 , set a Cross at the top of the hill at Kallikulam. Now, statues of the Risen Lord and Our Lady of Sorrows on this hill continue to attract pilgrims. As number of catholics increased, people wished to build a bigger church. The present day church was built in 1884, as the venue and measurements were indicated in the foem of snow by Our Lady herself. The centenary celebration was held in 1985. In March 1939, Our Lady appeared to 6 children on this hill. The grotto built on the place of “the impression of the feel of Our Lady” was blessed by Bishop Roche, the first Bishop of Tuticorin. He praised this Grotto as “the Lourdes of the Southern Pandi land”. Pilgrims from various places come here to receive God’s blessings. St. Michael’s church was built in 1910 for the Paravas. In 1920 was built the church of St. Antony . Villagers from Pannaipatti settled in Siluvaipatti in 1919. Apart form the church in Siluvaipatti, there are many buildings built for the pilgrims.
Website: www.kallikulam.com
Posted by Lawrance at 5:43 AM