Our Lady of Snows - Tuticorin 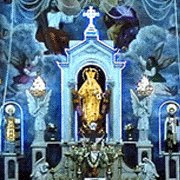 Our Lady of Snows - Tuticorin
The Paravars Of The Pearl Fishery Coast
The history of Shrine Basilica is closely connected with the history of the conversion of the PARAVARS, the indigenous people of the Pearl Fishery Coast. In fact, Our Lady of Snows, is fondly called in Portuguese senhora, Das Nevis which means Our Lady of Snows. She has been given the unique title of Yelu Kadalthurai, Yega Adikala Thai in Tamil which means the Mother of Refuge for the seven major coastal villages, viz Vembar, Vaippar, Tuticorin, Punnaikayal, Virapandianpatinam, Thiruchendur and Manapad.
The Mass Conversion Once the paravars of Pearl Fishery Coast had a sharp dispute with the Muslims of this area regarding the right of Pearl Fishing. The Pattankattimar (The leaders of Parava villages) requested the Portuguese to rescue them form the cruelties of the Muslims and the Portuguese and the Muslims were routed. As a token of gratitude to their redeemers, the Portuguese, the Paravars from about 22 villages numbering about 30,000 embraced Christianity in the y ear 1535-37 . In October 1542, St. Francis Xavier arrived on the shores of the Pearl Fishery Coast to catechize them and strengthen them further in their faith.
The Persecution Soon there arose a great religious persecution by the Nayak of Madurai who had by this time taken control of the Pearl Fishery Coast. They set fire to churches and houses of Catholics. Hence the Paravars left Tuticorin and fled to a nearby Island named Raja Theevu (known as Hare-island today). They took along with them the statue of Our Lady of Snows and solemnly installed it in a newly built church there. It was there till the Jesuits returned to Tuticorin in 1610.

Another tradition says that during the war, the church of Our Lady of Snows at Raja Theevu was destroyed and therefore, the people removed the statue from there and installed it in a small chapel of St. John the Baptist at Sivanthakulam near Tuticorin. When the Dutch occupied that area, they carried away the statue to a church at Korkai. And it was brought back to Tuticorin in 1699.
The Miraculous Statue The beautiful statue of Our Lady of Snows has always been looked upon as a miraculous one, as many miracles are said to have occurred in the Shrine from the time of its installation at St. Pauls Church.
Saved From A Thunderbolt The first miracle is narrated by Rev. Fr. Vigilius Mansi himself who built the present Church of Our Lady of Snows. In a letter dated September 24th, 1708 addressed to one Father Maria Ignacy in Rome, he narrates how on April 4th, 1707 at mid-night, a sonorous and fierce thunderbolt fell in his residence where he had kept the miraculous statue for a short time and how he was miraculously saved by Our Lady herself.
Other Miracles Narrated The Jesuit report of 1709 by Fr. Francis Vaiz mentions the following miracles.

A newly converted Dutch Officer was attacked by a serious disease. No doctor nor medicine could cure him. The condition became worse day by day. On his death bed, he had recourse to Our Lady drank the water that washed the feet of the miraculous statue of Our Lady of Snows. What a surprise! He began to get well from that moment and he totally embraced the Catholic faith latter.

Two people who were paralyzed and lost all hope of cure, vowed in front of the miraculous statue that they would pray the Rosary daily till the end of their lives and drank with faith the water that washed the feet of the statue. Slowly they were relieved of their paralysis and soon got completely healed.

A supposed to be barren woman with faith drank the oil form the lamp kept near the miraculous statue and was conceived and became a mother of a child.

Once a pious woman had gone to the Shrine to participate in the Novena Service. At that time her hut caught fire by a piece of cloth that fell on the oil lamp. The whole hut should have been burnt to ashes but surprisingly, only that piece of cloth had got burnt!

The holy custom of drinking the water that washes the feet of Our Lady in the statue and using the oil from the lamp are still followed by some devoted people.
Website: www.kallikulam.com